A Lightning Network for Hivemind

Bitcoin and Truthcoin are too different for the original Lightning Network proposal to work. One huge disadvantage: Bitcoin has just one dimension, whereas Truthcoin would have one per market-state. That’s not a big deal.

A bigger problem is the incentive-structure of Truthcoin – it involves a third party (the Oracle.). Truthcoin will only work, if we can guarantee that agents will always get paid for (exactly) the services they provide.

Truthcoin has a Distributed Oracle “Corporation”, which pays employees for their honesty. These payments come from traders. However…if trades are being moved off chain, how are we to get ‘the chain’ to figure out “how much to bill the traders” (for their trading)!

We’ll start with a simple example, to solve the “dimensions” problem.

We can create something similar to the capital markets of today. In these markets, users [1] deposit cash into a commercial bank, [2] transfer that money into a brokerage account, and then [3] make trades by interacting with a brokerage.

To replicate that in HM, we will use the LMSR for issuance. Then, trades among issued shares will be linked to a market through a bidirectional channel.

Both get a refund transaction, refunding everything they put in, which is valid after T=2 months (or whatever). The refund transaction has priority zero (ie, it will be replaced/updated, …in the parlance of the LN whitepaper it “has not (yet) been invalidated”).

4] A and B communicate, off blockchain, whenever they like, to update the transaction.

Which can then be updated to:

Some time after that, the may update again:

This simple example demonstrates that trading can still happen within one on-chain message. The only requirement is that the dimensions are pre-selected.

To address this requirement, trading might start with large (kb) messages (of many pre-selected share-dimensions), and, just before broadcast, reduce to a smaller message (one which excludes share-dimensions which were never transacted in). In this way, both parties may agree to update to a smaller (economically-equivalent) message.

Now, on to our second, and more important, difference between HM and BTC: free-riding on a third party.

First, we have some advantages:

First, I’ll restrict the movement of share-tokens (but not Bitcoin, of course) to two places: [1] “the” MSR of the Market, and [2] in a payment channel. This means: no sending to a friend, no multisig, no locktime, no sending to yourself, etc. If you want to store your wealth, just use the LN to hop out of the Hivemind sidechain and back into Bitcoin (which you can do at any time).

Now that we’ve cornered the share-tokens, and coralled them into our special ‘channel’ message-type, we can see if we can force them to do accurate bookkeeping.

Our strategy is similar to the original LN: allow two parties to create new asset-allocation(s) “at will”, and allow parties to invalidate old allocations, such that any non-conformity results in all funds being dramatically stolen.

However, in this case, the two parties have a mutual interest in defrauding the oracle. Instead of paying fees with each trade, they could simply wait for all of their off-chain trades to be finished (potentially, millions of them), and then simply pay one trading fee (on the net balance of the million trades).

This has undesirable effects: [1] if there is no selling, total trading fees will always be a tiny percentage of open interest, [2] it causes lower overall fees, which encourages the magnitude of the fee-parameter to rise, creating additional trade frictions and dead-weight losses. It makes the (intended) “trading” fee more of an “open interest” fee.

So, we will need to force each off-chain transaction to [1] calculate, [2] pay, and [3] aggregate the correct trading fee, such that the grand total is correctly calculated / paid when the full transaction is broadcast.

As with original LN, we’ll have to give the counterparties an incentive to “rat” each other out, to the blockchain (because, as it stands, they collectively have the opposite incentive) if either one screws up the calculation / payment / aggregation of the trading fee.

First, we add a new protocol rule, for valid messages:

We will use this as a kind of “slope” calculation (change in fees per change in trade-sequence). If the slope calculation is invalid, the honest party will be able to steal the counterpary’s funds.

This will be accomplished using two new paths: “Guilt” and “Trial”. Guilt is enforced with one of two new opcodes: “Check_Guilt_1_Verify” and “Check_Guilt_2_Verify”. Trial “Create_Trial_Verify”, “Check_TrialVerdict_Verify”, and

Here are some examples: 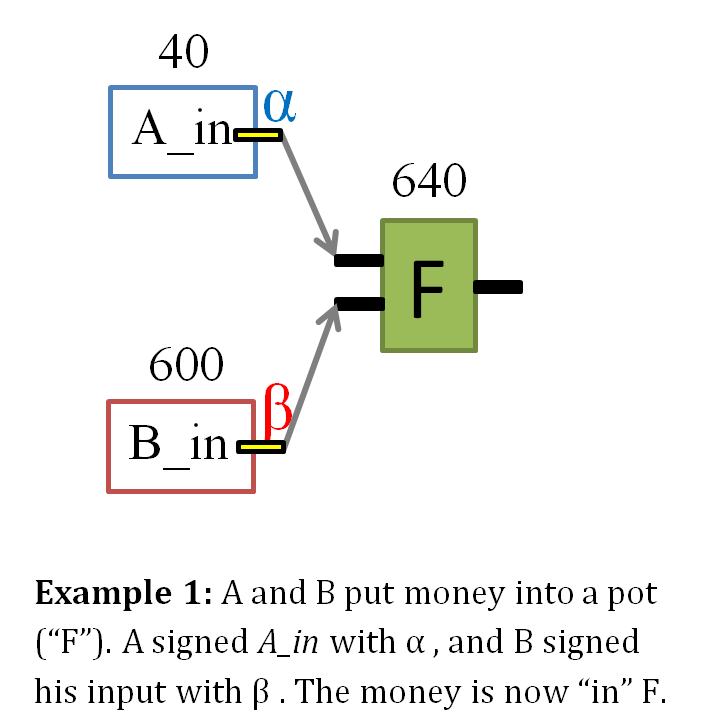 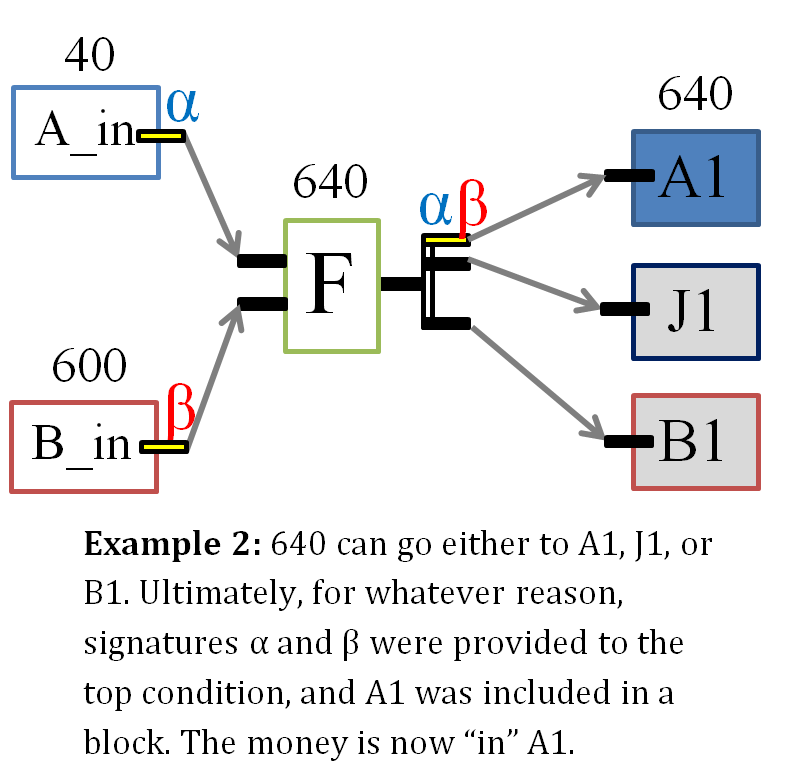 Here is an application of this notation to the original lightning network (the simplified, “two person” version which applies most to us). 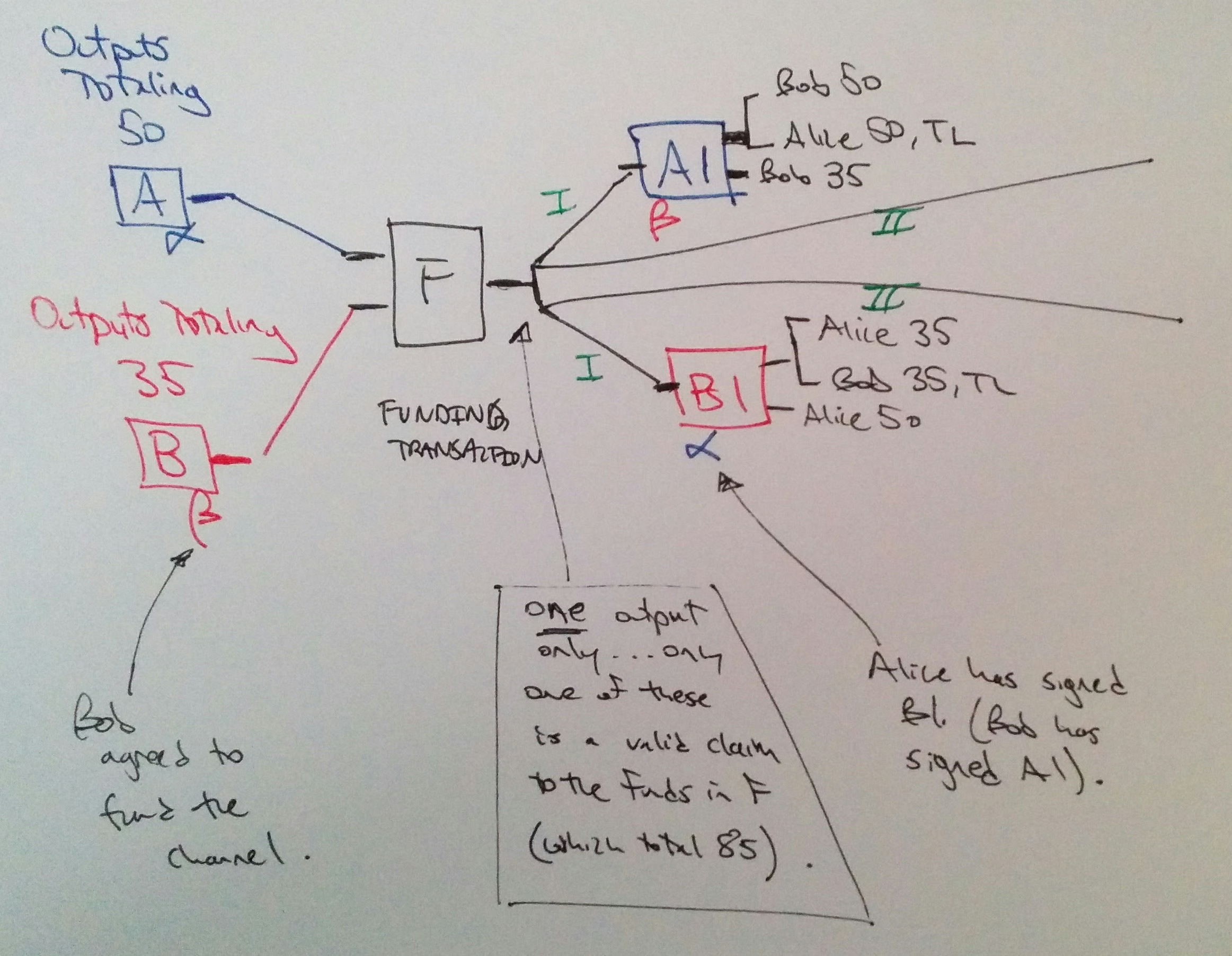 Above: The network is in state “I” in green. From here, it may progress to state “II”, off chain. Note that only one line coming out of F can make it into a block…the others will all be rejected as double spends.

Below: Alice and Bob have added state “II”, and, more importantly, they have each invalidated state “I”. With this invalidation in place, the payment has gone through. 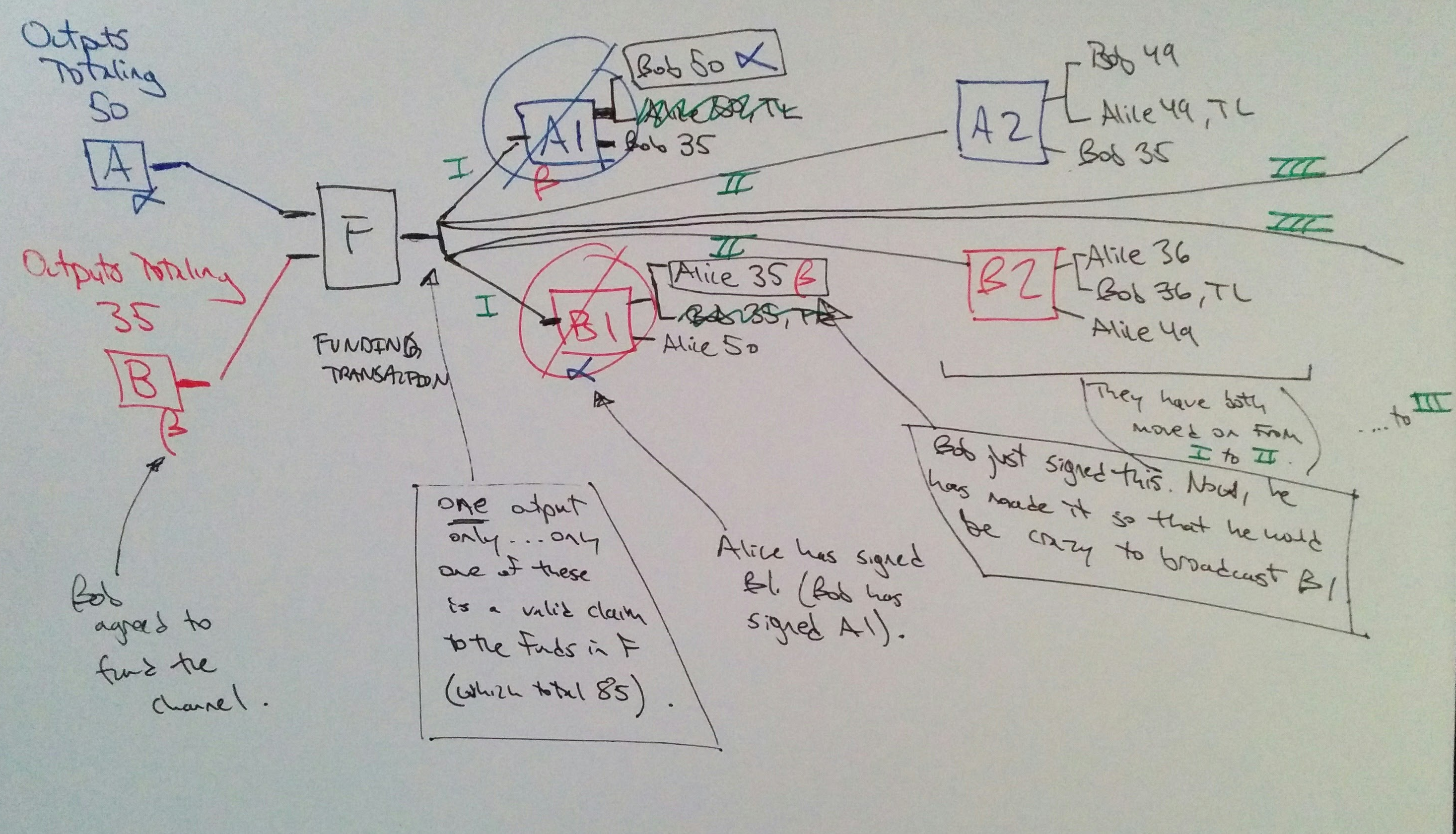 ( LN transaction are different from normal Bitcoin or credit card transactions. Typically, when the “electricity” hits your phone, or the cc-machine, the payment goes through. With LN, the payment doesn’t go through until you invalidate your current state. )

With the notation established, let us continue.

The following examples will assume, for simplicity, that Bob is always the one who misbehaves, and Alice is always honest.

Most basically, Bob might propose a state update, but decline to include the trading fee.

How is Bob punished for this? Alice submits A1 to get her money back, and then:

At which point the computer:

In step 3, guilt can also be established if A1 and A2 have the same sequence number.

How is Bob punished for this? Alice submits A1 to get her money back, and then:

Which alleges that transaction-pair (A3, B3) never existed. Specifically, that B3_alpha doesn’t exist.

Let us discuss how this accusation establishes Bob’s unique guilt. When attacking, A4 is created before (A3, A3_beta, B3, B3_alpha) are created – otherwise we would be able to use them to establish guilt. The most incriminating evidence against Bob is that is definitely supposed to have B3_alpha at exactly this point: [1] Bob has no way of fabricating it, without Alice’s private key, and [2] Bob needs to retain B3_alpha (non-invalidated), until after Alice sends over B4_alpha.

They can’t work together to circumvent this system, because one of the two must “move first”. If Bob waits for Alice to make a fake B3_alpha, Bob can use Guilt against Alice.

So trial succeeds, after a TimeLock, if Bob cannot produce B3_alpha.

On the other hand, what if Bob decides to use the trial feature to his own nefarious purposes? Perhaps, Bob will constantly accuse Alice of mis-incrementing. Alice has to constantly defend herself against frivolous trials. How can we publish Bob for these frivolous lawsuits?

And has just signed a statement alleging that A3_beta does not exist. Alice, of course, has the A3_beta, and can prove her innocence.

But now she wants revenge. How might we allow her to get some?

Well, Alice submits A3 to get her money back (as always), and then uses:

This proves that Bob asked for a trial, wrongly. As a result, Alice can now steal all of Bobs money.

We now have achieved a new condition: [3] no one will skip sequence numbers when they propose updates.

When combined, these three conditions solve our incentive-compatibility problem.

Below: Beginning to sketch out the normal Bidirectional Channel.

Below: With the modifications discussed above.

We’d like to prevent this cumbersome setup from damaging the benefits of the original LN.

To do this, we only force a sequence number to increment if any share-tokens are traded. Otherwise, it does not need to increment, thus it is fully compatible with cash transfers on the Bitcoin lightning network. Users can take their Bitcoin, within a payment channel, and ~instantly pay it into a Truthcoin Trading Channel, and proceed to ~instantly make trades with it. Then, they can instantly sell and withdraw back to the Bitcoin mainchain.

This is what allows us to painlessly ban all transaction types that aren’t “buy”, “sell”, “create channel”, “close channel”, and “rollover channel”. All stored value can rest safely in Bitcoin, until it is ready to hop over to Hivemind for use.

The Case Against Augur

Status of the project. How you can get involved. 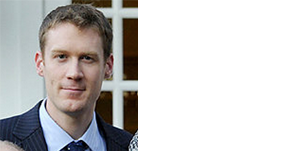